In 1994, at the first European Dance Movement Therapy conference held in Berlin, the idea of a European Network or Association was born. In 1995, Annelies Schrijnen van Gastel, who was running a DMT training in Rotterdam and interested in professional development, established the Network for the Professional Development of DMT. Thereafter, biennial meetings were held that brought together Presidents and Chairs of DMT National Associations, programme leaders, business representatives and academic researchers. The Network looked to develop parity across practice ethics, professional standards and training programmes across Europe.  The Network meetings coincided with ECArTE’s  (European Consortium of Arts Therapies Education) conferences.

Diversity was found, and still exists, across Europe; some countries have DMT trainings established in universities with academic recognition, some have achieved governmental recognition of the profession, others are just at the beginning. There are some DMT training programmes organised by private institutes and regulated by the National DMT Association, while other countries have held established Criteria for Training for 15 years plus and have been training Dance Movement Therapists for over 25 years. The ‘younger’ associations learn from the ‘older’ associations.

From the Bologna Meeting to the Inaugural Meeting: Commitment and Process

A seismic shift happened in March 2007 when APID, the Italian DMT Association, hosted a meeting in Bologna and invited representatives from all European DMT Associations who met certain levels of professionalism e.g., specific criteria for training, a register of professionals, ongoing training initiatives for practitioners, and working towards (or already achieved) accreditation and/or regulation from national DMT or governmental bodies. The commitment to establish a professional European Dance Movement Therapy Association was agreed and formerly actioned. The major players at this time, who were willing to commit some funds to support the project, comprised Italy, UK, Germany, Netherlands and Greece.  Each committed to 500€ to start the process, allowing the investigation of European legal requirements and to support the procedures necessary to establish a European professional association.  This meeting culminated with the formation of a Steering Group which included Susan Scarth (UK), Vincenzo Puxeddo (Italy) and Susanne Bender (Germany).  Greece and Spain also expressed their dedication and support to this initiative.

In September 2007 in Tallinn, Estonia, at the 10th gathering of the Network, a group of 24 participants representing 13 countries (Netherlands, Spain, Germany, UK, Estonia, Latvia, Greece, Russia, Finland, Sweden, France, Poland and the Czech Republic) agreed to the centrality of the Bologna Process that address academic regulation of programme credits and parity across the tertiary education sector in Europe. To support the work of the new Steering Group, the Network established an interim Network Executive Board with Working Groups to cover the business of training, professional practice, research, website, and included constitutional work (Steering Group). The interim Network Executive Board comprised Penelope Best as Chair (taking a neutral position rather than representing one nation), Heidrun Panhofer (Spain), Zuzanna Pedzich (Poland) and Klara Cizkova (Czech Republic).

A listserve and website were created – www.european-dance-movementtherapy.eu  which continue to update the DMT community on the development process. English was agreed as the common language.  Once EADMT is established the Network will dissolve and the work will be taken over by the EADMT Board and new working groups.  At this point the website should evolve into an EADMT website.

The Constitutional / Steering Group held its first formal meeting in October 2007 in Milan, Italy.  The group included representatives from the professional associations of Germany, UK, Italy, France (initially invited as an observer but quickly becoming a core group member), and the President of the interim Network Executive Board.  The group considered the legal requirements for founding a professional Association of associations, proposed the official name – European Association Dance Movement Therapy (EADMT), drafted a Mission Statement, Aims and Objectives and devised provisional criteria for Professional Association standards.  A huge amount of work within one initial meeting!

In March 2008 the Constitutional group met in Munich to discuss the Ethical Code. It was agreed that all 48 geographical European countries (not just EU members) with national DMT associations would be invited to become members. It was further clarified that the EADMT was designated as an Association of Associations and not for registering individual DMT’s. It was provisionally agreed that EADMT be domiciled in Germany: a) the currency would be Euros, b) there were strong connections with a German lawyer to advise on European legislation, and c) there was potential for the office and hosting space with administrative support from Zentrum Fur Tanztherapie. Thus, as a European professional Association must work within the law where it is domiciled, all documentation must be translated into German.

September 2008 saw the Constitutional group meeting in Gorgonzola, Italy, (and included Denmark).  The focus was on voting rights where it seemed the development of EADMT mirrored the politics facing European politicians!  A key proposition emerged that would ensure the democracy of EADMT and give the power of decisions and veto to the General Assembly rather than the Board.  The Board would be a facilitating entity that ensures the business of EADMT is carried out in accordance with the requirements of its’ members, the General Assembly.  It was proposed that only Delegates of the member Associations would have a vote in the General Assembly. Delegates, when they become Board Members, lose their voting rights and their position as a representative of their National Association. Instead, they become a key representative of EADMT and work for the members Associations as a group.  The Deputy Delegate then becomes the official Delegate and the representative of the member Association.

In October 2008 the Network Board and Working Groups met in Munich, Germany. Data collected by the Education &Training Working Group was presented, but the results were not as conclusive as had been hoped and therefore clearer criteria for application to EADMT were developed. The Network and Working Groups were aiming to include as many countries as possible in this process, while endeavoring to maintain high standard of requirements.  Finance created an added differentiation between countries. The diverse economic situations in Europe challenge the Network to find an equitable membership fee. However, 11 countries (UK, Poland, Spain, Greece, Italy, Russia, Germany, Latvia, Denmark, Netherlands, and Czech Republic), have offered fees that will purchase the necessary legal advice and pay for the registration of the Association in the German Court of Law.

In February 2009 the Network Secretary carried out phone interviews with each potential applicant to clarify terms, definitions and criteria. This was a key process in ensuring inclusivity from acknowledgeable position.  The Constitutional group, meeting in Edinburgh, Scotland, with representatives from Greece, Netherlands and the Network Executive, were able to utilise the information gathered and consider the feedback received about the proposals.  Voting rights were considered further, the Statutes were refined and Criteria for membership was agreed.  These revisions were based upon consultation and feedback across 11 national associations.

The final meeting for the Constitutional group was in June 2009 in Cagliari, Sardinia where the Statutes and the Rules of Procedure were finalised.  It was a momentous occasion!  Meanwhile the Network Executive completed designing the application forms, procedures for processing, the management of correspondence and explanation for all participating countries.  Applications were submitted in September 2009, peer reviewed and finalised by January 2010.  Formal invitations to the ill-fated Inaugural Meeting of the EADMT in April 2010 in Munich were sent out.  The Iceland volcanic eruption postponed the meeting.  An alternative date was found and nominees for the Board again clarified and attendance guaranteed.

2010: The Inaugural Meeting in Munich

In October 2010 EADMT was born!  Europe has one DMT voice, which allows for difference while sharing a commonality. Huge thanks are due to the Secretary General of the European Music Therapy Confederation who offered vital support and information at the beginning of this last stage; to all those on the Constitutional Steering group who worked so tirelessly over many months growing and nurturing the concept; the Network Executive who brilliantly coordinated the final ‘push’; the website, research, training and education working parties who kept us informed and educated; and to all of you who have participated by giving feedback, by submitting an application, by promoting the standards in your National Association and for being present at the birth. This has been a truly European and collaborative process from the start. 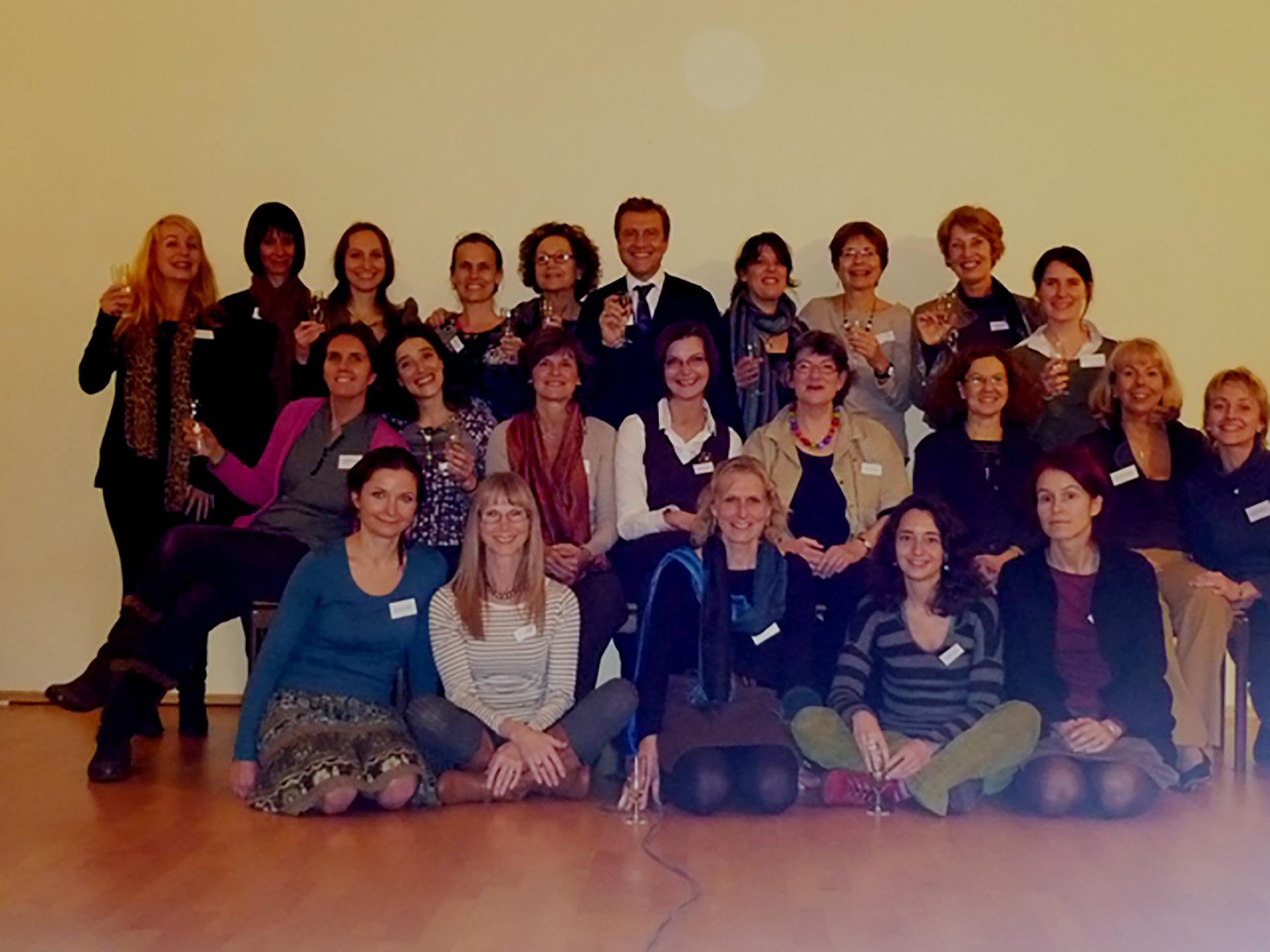 The Inaugural Meeting was a wonderful celebration of all that is European and the accord that each Association brought created a strong and positive energy.  A very large thank you to Susanne Bender and her colleagues who hosted the Inaugural Assembly, ensuring that everyone was well housed, fed and beautifully cared for – every detail considered.  Thank you too to the Observers (Belgium, who played such a key role in the business of the General Assembly.  Many of the Founding Members (UK, Italy, Germany, Spain, Poland, Russia, Hungary, Greece, The Netherlands, Latvia, Czech Republic, France) travelled with the Board (Susan Scarth – President, Antonella Monteleone – Secretary General, Nina Alcalay – Treasurer and Kristine Vende -Communications) to the Notary’s office in downtown Munich on Tuesday 26th October and witnessed the signing and hand-shaking with smiles all around!  Official registration was agreed by German Law on November 29th 2011 and communicated to The Board from Munich (Susanne Bender).  Now the work begins.  The Board have several jobs to undertake including establishing a Bank Account and facilitating the Working Groups:

Thank you to Penelope Best, Retiring President of the Network.

The meeting finished with a celebration ritual for Penelope Best, who was stepping down as the President of the Network. The GA expressed gratitude for the generosity with which she has shared her time and skills and her invaluable contribution to the foundation of the EADMT was acknowledged warmly.

The annual General Assemblies are hosted every year by a different country member and represent a major event in the community, gathering many observers from all countries. Workshops take place the day before the GA, offering the possibility of deeper exchange and embodied interconnections between the participants. Over the years, the GA procedures are consolidated and a lot of hard work has been accomplished with important results. Delegates and deputies continue working through the year participating in the Working Groups while the Board supports, facilitates and coordinates all these actions.

Three EADMT Conferences have been organized: the first one “Resilience within a Changing World” was held in Latvia – Riga 2014, the second one “Crisis, Creativity and Society” was held in Italy – Milan in 2016 and the third one “Crossing Borders and the In-Between. DMT at the Leading Edge” was held in Greece – Athens in 2018. Experience of organising big events is growing among the EADMT members. Each Conference has been a unique event of connecting, experiencing, dancing and exchanging scientific knowledge. A Symposium in Netherlands (2021) and the next conference in Berlin (2022) are already in schedule.

Thanks to Julia Morozova a film about DMT in Europe has been produced in 2017. The EADMT is present in the media (website, Facebook, linked-in) and edits an annual newsletter since 2018.

An important step to ensure high quality and best practice among all European DMT practitioners has been taken, thanks to the hard work of the Training Standards Group (Susan Scarth, coordinator). After an extensive dialogue between the members, the GA in Barcelona (2017) adopted common Training Standards Criteria applicable by all Full Professional Members starting from 2020.

The pandemic of 2020 affected our community and forced us to adopt new ways of connection, practice and exchange. The 2020 GA was successfully held online. We missed embodied interaction but important subjects were discussed and decisions were taken as, for instance, the theme of our next conference, new memberships, profession recognition, continuous education and research on DMT in Europe.

What is Dance Movement Therapy (DMT)?

DMT is defined by the European Association Dance Movement Therapy (EADMT) as ‘the therapeutic use of movement to further the emotional, cognitive, physical, spiritual and social integration of the individual.